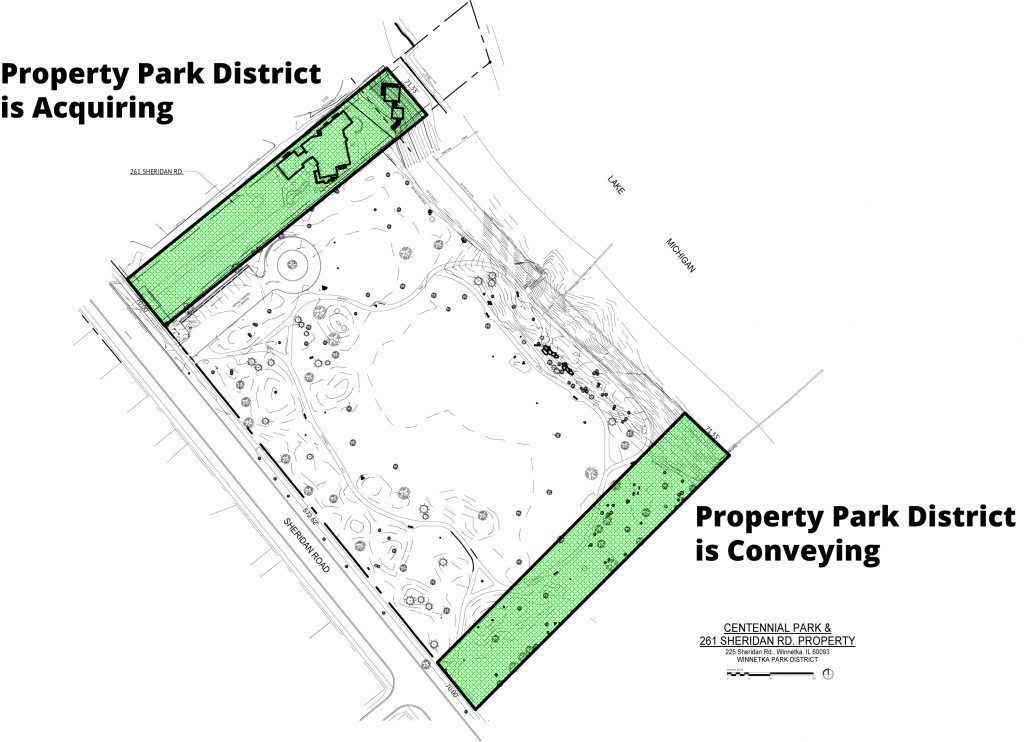 “This exchange marks a significant milestone for our Village, aligning Winnetka’s lakefront property to create one of the largest public beaches on the North Shore,” said Mickey Archambault, Winnetka Park District Board of Commissioners President.

The property exchange allows for the combination of Elder Lane Beach and Centennial Beach to provide nearly 1,000 feet of continuous public beach.  It also joins the two parks to create nearly eight contiguous acres of parkland.

“One of the key steps in the Winnetka Waterfront 2030 plan is to acquire the residential property between Elder Lane Park and Centennial Park,” said Warren James, one of seven commissioners of the Winnetka Park District board, which voted unanimously in support of the property exchange. “Only with the acquisition of the property can we implement the Waterfront 2030 plan as it was envisioned and adopted by the Board back in 2015.”

Mr. James, who co-chaired the development of the Winnetka Waterfront 2030 plan, continued, “We are now positioned to construct shoreline breakwaters in a cost-effective, efficient manner to protect Elder Lane Beach, Centennial Beach, and the respective bluffs.  Shoreline protection planning is in the works. We are working to apply for permits in an effort to begin shoreline work next spring.”

The Winnetka Park District recently issued $9 million in bonds to pay for lakefront improvements, $4 million of which is earmarked for significant, critical improvements at Lloyd Beach.

“The remaining $5 million is available for essential shoreline protection measures at Centennial Beach and Elder Lane Beach, which are in dire condition,” said Archambault.

“The two beaches (Elder and Centennial) are approaching a critical condition, similar to Lloyd Beach, as recent lake conditions continue to inflict significant damage which will make future restoration far more expensive if not addressed now.  If we were to pause and not act, we very likely would incur more damage along this shoreline.  In these times, it’s incumbent upon the Park District board to be responsible financial stewards and, in so doing, maintain the value of Winnetka’s wonderful lakefront assets.”

Aside from standard real estate transaction costs, the Winnetka Park District will not incur any expense to exchange the properties, thanks to a private individual’s generosity.

“Merging these two parks by acquiring the private parcel between them has been a priority for many years,” said James.  “So, we’ve kept our eyes on the prize for quite some time.  The pandemic drastically affected the Park District’s revenues and we have been required to significantly tighten the Park District’s expenditures. The Park District has been, and continues to be, without the resources to conduct an outright purchase of the property. In light of its many competing priorities and extremely limited financial resources, the Park District could not have acquired the private parcel independent of the exchange.  When we were presented with an opportunity to accept a gift of substantially greater value in exchange for a parcel of park property, we realized it was a once-in-a-generation opportunity.”

“To have a long-term goal realized, given all its positives, truly is amazing and is of great, great benefit to the residents of Winnetka.”